Cairns, Australia is an excellent base for your scuba diving and for a wide range of wilderness adventures, both on land and at sea, with new challenges always on offer. In this region, two seasons prevail. The ‘wet’, beginning in November and lasting until April, and the ‘dry’ for the rest of the year. During the summer months, (the ‘wet’) the wildlife is at it’s most active, waterfalls are gushing and the landscape comes to life. Both International and Domestic airports are located here with daily flights to all Australian capital cities. There are also interstate bus & train services to Brisbane and further south, to Darwin and Alice Springs. All major car hire companies and numerous small local ones are also available, and nearly all have four-wheeled drive vehicles for hire. Australia’s widest range of safari and special interest tours leave from the city of Cairns. These include treks to Cape York Peninsula, Alice Springs and numerous other inland destinations. Virtually all adventure type sports are available in and around the area. 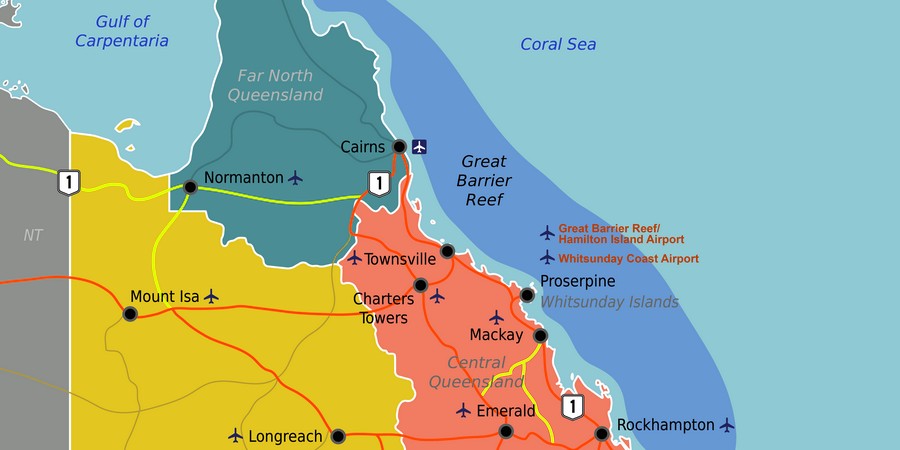 This tropical city can also be the jumping off point for numerous other adventures in and around the area known as Far North Queensland. The Bruce Highway along the Coastline is the major north-south road and is the most direct road route to Brisbane and all cities in between. The Kennedy Highway heads inland through Atherton and has major links to the Northern Territory out from Townsville.

There are numerous areas of interest to the traveller in Far North Queensland and even though you may be travelling to Cairns to learn to dive and see the Great Barrier Reef, it is worth spending more time in the area and explore what else is there. Rainforest walks are prolific, so are day trips north to Port Douglas and the Daintree area. Inland there are massive caves systems that can be explored, lava tubes and rock formations that are exclusive to this area alone.